Garmin Greatly Expands the Number of Units With USNG Capability 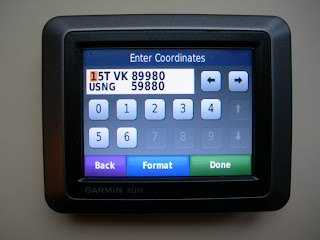 While many GPS manufacturers have offered navigation by U.S. National Grid (USNG) or Military Grid Reference System (MGRS) as a selectable feature on their handheld models, Garmin was pretty much alone in offering that capability in dashboard models for the general public.  Even then, the capability was only available in the Garmin nuvi 500 and 550 models.
Recently, Garmin made known that it had significantly expanded the number of dashboard models that have USNG "drive-to" capability.  In addition to several models that were introduced in 2011, and those that will be released in 2012, the list now includes 12 different series:
To access the USNG feature of these Garmin GPS units, requires only seven simple steps: After being setup as described above, the unit will provide "drive-to" instructions to a USNG coordinate the same way that feature currently works on the unit for a street address.   However, by tapping into this capability of the unit, a user gains the ability to get navigation information to a location without a street address (i.e. railroad crossing for a responder, or boat landing for recreational use).﻿

﻿
Comment: In addition to education about the capabilities of the U.S. National Grid, successful implementation will require vendor participation in efforts to operationalize the concept.  Kudos go out to Garmin for their vision and willingness to be a front-runner in that effort!
A big thanks goes out to Lieutenant Al Studt, Cape Canaveral, Florida, Fire Rescue for the steer to this information.
﻿
﻿
Posted by Steve At 9:30 AM