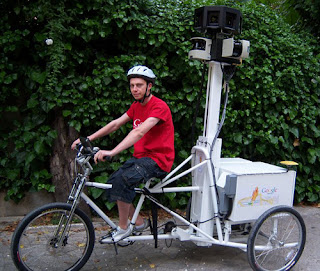 Click the link below to read the article from the New York Times:

N.Y. / REGION   | November 15, 2011
Quietly, Google Gets Its View of the Park
By LISA W. FODERARO
A tight-lipped team behind the Street View feature on Google Maps is using a tricycle fitted with an elaborate camera system to photograph Central Park's winding pathways for online exploration.


Comment: As noted in the article, Google's trike has already visited all sorts of famous places around the world like the pathways of Paris, surprising it has taken this long to show up in New York City.....

The flip side of the situation is, its one thing to collect data like this once, its completely another thing to maintain it over time.  To do that, you would have to have as much money as....well, Google.

To view the various ways Google collects their Street Views, go here.
Posted by Steve At 7:15 AM