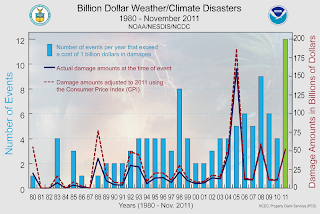 In early December, several news organizations reported the National Oceanic and Atmospheric Administration (NOAA) had confirmed what many had suspected - even with a month still left in the year, 2011 was the worst year on record for weather related U.S. disasters.  In all, NOAA was reporting there had been 12 events, each causing more than a billion dollars worth of damage.

To put this report in perspective, NOAA has set up a web site to tell the tale.  Go here.


Comment: In 1860, 80% of Americans lived in rural settings and the nation's population was approximately 31 million.  In 2010, 80% of Americans lived in urban settings and the country's population was approximately 310 million.  While there are more than a few who would like to focus discussion of rising costs of weather related events solely on climate change, the reality is that as infrastructure has become more tightly interwoven, and the nation's population has become more densely packed and grown 10 fold, the opportunity for weather to bring harm to individuals and man-made structures has increased significantly over the last 150 years.  Thus, it's all the more reason why the best possible geospatial technology should be in the hands of the Emergency Sevices Sector.  An ounce of prevention, is worth a pound of cure.
Posted by Steve At 8:00 AM