LightSquared - Down for the Count 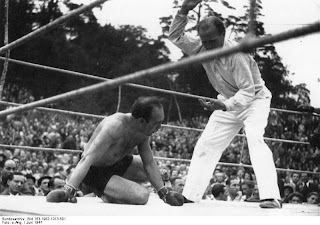 Photo: German Federal Archive
On Friday, both the National Space-Based Positioning, Navigation and Timing (PNT) Executive Committee (ExComm), and LightSquared had something to say about each other.
For its part, the ExComm released a letter that basically says: the "science" of LightSquared will not work without causing irreparable harm to GPS - no further testing is warranted.  Coming from ExComm co-chairs, Deputy Secretary for Defense Ashton Carter, and Deputy Secretary of Transportation John Porcari, that puts LightSquared on the mat, down for the count.

For its part, LightSquared attempted to stagger up from the blow by accusing the ExComm of "bias and inappropriate collusion" and proposing a third round of testing on its terms.  With billions at stake, staying on the mat is not an option.

For anyone joining this saga in the 13th round, past history of the fight and related blog links can be found here: The LightSquared Fight Card.


Comment: Although it's not over until the referee raises an arm - it's getting pretty darn close.
Posted by Steve At 8:00 AM