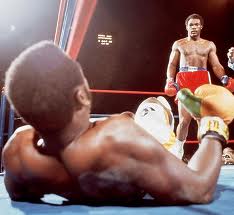 Photo: Sports Illustrated
After more than a year in the boxing ring, LightSquared has just experienced a series of knock-out punches that have put it on the mat for the final time.  First came the National Telecommunications and Information Administration's (NTIA) release of three reports on February 14, 2012.  These reports clearly show, "...LightSquared's original and modified plans for its proposed mobile network would cause harmful interference to many GPS receivers."  This development was quickly followed by a Federal Communication Commission (FCC) news release which stated:

NTIA, the federal agency that coordinates spectrum uses for the military and other federal government entities, has now concluded that there is no practical way to mitigate potential interference at this time.  Consequently, the Commission will not lift the prohibition on LightSquared. The International Bureau of the Commission is proposing to (1) vacate the Conditional Waiver Order, and (2) suspend indefinitely LightSquared’s Ancillary Terrestrial Component authority to an extent consistent with the NTIA letter. A Public Notice seeking comment on NTIA’s conclusions and on these proposals will be released tomorrow.

In essence, the above verbiage means LightSquared's efforts to use its assigned spectrum, with its current design, is dead.  And true to its word, on February 15, 2012, the FCC began the formal process of rescinding LightSquared's conditional waiver to operate.

For a more expansive review of the story behind this now defunct threat to GPS, click the link below to read an article from the New York Times:


Loss of a Wireless Dream Caps a Fast Fall From Grace
Additional information is also available on this blog at:

Comment: Defeated boxers are always looking for their next opportunity for redemption.  Expect no less from LightSquared.  Until that happens - here's the call for this bout, by the one and only Howard Cosell.
Posted by Steve At 8:30 AM