The Responder as a Sensor 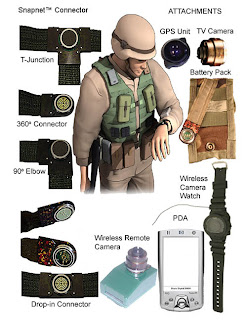 Physical Optics Corporation
We all know the movie scene - a military Special Forces type is on the verge of putting an end to a diabolical villain in a dark and spooky building - and low and behold, some higher up is watching and monitoring events in real time because of a variety of sensors the soldier is wearing.  Although ten years ago that scenario seemed so high-tech it was only vaguely believable, the reality now is that sort of capability is knocking on the door of the nation's first response community.  In total, it's an approach known as PAN, or Personal Area Network.  A responder's sensors are linked together using a "wearable network" which also makes their personal data stream available to others.  For an example of this approach, go here.


Comment:  During his Twin Cities GECCo lectures, Dr. Carl Reed prominently mentioned this concept as a way to think about where the world of emergency response was headed.  In theory, responders will eventually become part of a web of environmental sensors that will be used to manage disasters and emergency response efforts.  A point which appears borne out by the accelerating use of wearable police cameras and development of personal Heads Up Devices as previously reported on this blog.
Posted by Steve At 7:00 AM