University of Wisconsin Uses GIS to Plan for Disasters 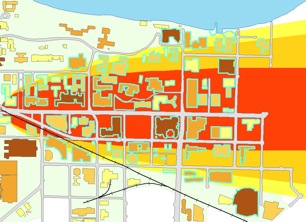 Chemical spill scenario for UW-Madison Campus
In keeping with similar efforts at some other major universities across the nation, the University of Wisconsin-Madison (UW) has been using a two year FEMA grant to develop a campus response plan for natural and man-made disasters.  However, of specific interest to the UW's plan to create a Disaster Resistant University (DRU), two entities with strong geospatial capabilities have been placed in lead roles.  First is the Land Information and Computer Graphics Facility (LICGF), which is serving as the campus focal point for the project, and second is the Polis Center at the Indiana University-Purdue University Indianapolis (IUPUI), which serves as FEMA's center of excellence for its HAZUS flood, earthquake, and hurricane modeling software.

According to UW campus newspaper The Badger Herald,

The UW plan is expected to be one of the first in the nation when it is completed later this year.

To learn more about this effort:

Comment: In many ways, the Virginia Tech shootings of 2007 have left many administrators of higher education with a myopic focus on campus security when planning for "a disaster".  As this project highlights, the reality is there is far more that could happen and should be planned for.
Posted by Steve At 7:30 AM