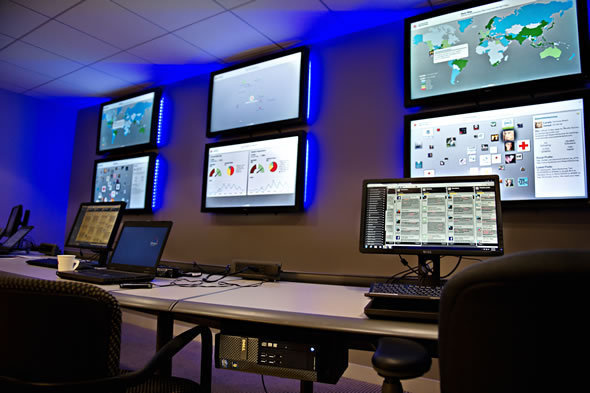 InformationWeek Government
Earlier this month, the American Red Cross (ARC) cut the ribbon on its new $500,000 Digital Operations Center that was paid for by a generous donation from the Dell Corporation.  In concept, the new ARC center uses a design similar to a facility Dell has been using since late 2010 to monitor world-wide social media reaction to its operations. However, ARC's new center focuses on collecting information from social media to discern relevant disaster event trends that can then be used to anticipate responses needs.  The idea for using an approach like this came from a 2010 Emergency Social Media Summit hosted by the ARC in Washington, DC.  To learn more, use the links below to review the ARC news release, or view the quick You Tube Video, that further discusses this development at the ARC:

Comment: Big kudos to Dell and the American Red Cross for this progressive effort! Not many individuals outside the Emergency Services Sector are aware the American Red Cross is the only non-governmental entity that has been specifically assigned the role of "Supporting Agency" in federally declared disasters by the National Response Framework (NRF).  Indeed, the wide range of critical humanitarian services the ARC provides means it is listed in no less than six of the fifteen Emergency Support Function Annexes to the NRF.  Consequently, it is essential that ARC data systems such as the one described above are able to provide a horizontal and vertical flow of data to Federal and State systems; an approach that will need to be worked over time since it is considerably different than the Dell model of internal support only.  Furthermore, although the ARC has made great strides over the past couple of years by bringing its data into the digital age - a previous initiative has been transitioning records for disaster centers from paper to electronic format - there is still some major work to be done on at least one other front.  Final frontier: Geospatially enabling its data for response community use.
Posted by Steve At 7:00 AM