Look Ma, No Hands! Driverless Cars Coming to a Road Near You! 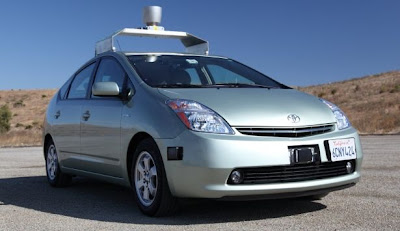 Google
On June 16, 2011, Nevada became the first state in the Union to pass a law sanctioning the testing of driveless cars on public roads.  Then, in the middle of last month, the Silver State followed up that first with another when its Department of Motor Vehicles (DMV) issued the regulations necessary to put the law into action.  Shortly thereafter, California began the process of following Nevada's footsteps, with other states apparently not that much further behind.  The, ah hum, single biggest "driving force" behind these developments......Google.  To learn more:

Comment: It may come as a surprise to many folks, but when it is no longer possible for an aircrew to see a runway to land due to conditions like heavy fog or blinding snow, an automated "hands off" landing system gets the nod on modern commercial aircraft.  We now also have autonomous helicopter drones delivering supplies to troops in Afghanistan.  So it would seem what Google has achieved here is right in line with those developments except for one thing: this fusion of geospatial technology in one place is far more self-contained and does not rely on dedicated, specialized external transmitters as is the case with the aircraft landing system described above (ILS).  A point which makes these developments by Google and others truly remarkable.
Three additional quick thoughts:
1.) For those wondering what the big deal is about the Nevada approval since Google had already been testing the technology on California roads to the tune of 200,000 miles, the answer is very nuanced as described in a San Francisco Chronicle article on the subject:

"There are two ways to bring amazing technology to market: to seek forgiveness and to seek permission," said Steve Jurvetson, managing director at Draper Fisher Jurvetson and another one of those who've been in Google's autonomous vehicles. "This gives Google and everyone else permission. And Nevada is the state to go to when you want to do things on the edge."

There were apparently no laws in California preventing the testing of driverless cars. I mean, after all, why would you have a law preventing something that doesn't exist?
2.) While I think I can appreciate the technology better than most, I'd offer a word of caution about making broad sweeping program pronouncements at this point in time. For example, take this one from Tom Jacobs, chief public information officer at the Nevada DMV:

“There will never be any crashes,”

Mr. Jacobs would do himself a favor by reviewing Murphy's law.  I've investigated enough aircraft accidents to know things that can't happen, do.  Testing conditions up until now have been closely controlled and very limited in terms of total mileage.
3.) My hat is off to the law enforcement community for all the fun they are going to have dealing with this technology as time goes forward.  "Sir, please step out of the car.  Have you been drinking and not driving?"
Posted by Steve At 7:00 AM