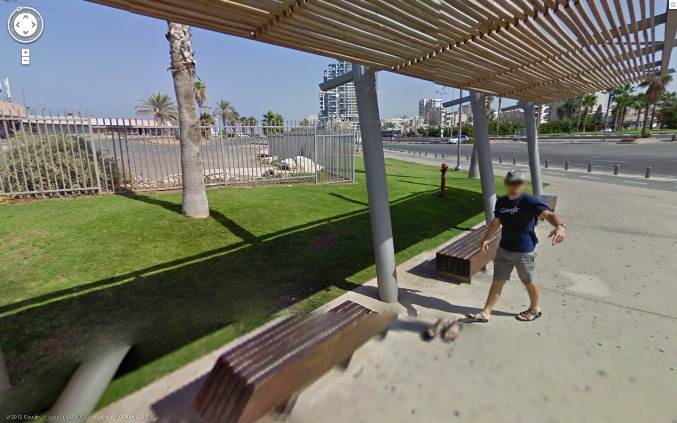 ﻿
This probably won't be news for the Google freaks out there, but over the past ten days there have been a couple of interesting StreetView developments.
1. StreetView Comes to Israel
Over the weekend, the Israeli government formally granted Google the right to turn on its StreetView feature in that country.  Beyond typical images that don't quite fit together perfectly in places  - as in the doubled set of sandals in the scene above - the Israeli government placed some restrictions on facial recognition (see also above - the man from Google) and on place views that could potentially jeopardize security.  However, the launch was not without controversy, with more than a few concerned that StreetView could be used by terrorists for attack planning.  To learn more, click the link below to read an article by the Associated Press:
Google Street View comes to Israel
Comment: Unfortunately, as we all know, terrorism concerns in Israel are not without merit.  However, as a way to help readers visualize that thought with better clarity, within the field of view of the beachside park above is the site of one of Israel's worst terrorism incidents.  It stands behind the fence on the left side of the photo; it's called the Dolpinarium.  I've strolled by it enough to know it stands largely untouched since the night of June 1, 2001, when a suicide-bomber carrying a drum filled full of explosives and ball bearings killed 21 and wounded 132 (mostly teenagers) waiting in the admission line of what was at that time a sea-side discotheque.  So against that backdrop, the debate taking place in Israel about what should be geospatially offered to the general public online, is one that is going to repeat itself many times over in the coming years - much like what is already happening in the U.S. and India.  And, if we don't get it right - the consequences could be substantial.

See the right side bar for the U.S. geospatial data sharing guidelines of the FGDC and NSGIC.

﻿
2.  John Stewart on Google's $25,000 StreetView Fine by the FCC﻿
Early last week, the FCC fined Google $25,000 for its refusal to provide information about the total range of its data gathering efforts associated with StreetView.  John Stewart tells the story best.  See below:

Comment: Hope your workweek goes well!﻿
Posted by Steve At 7:00 AM