After attending GITA's Dallas-Forth Worth, Texas GECCo workshop conducted on June 16-17, 2011, representatives of Texas electrical provider Oncor took to heart the message that America's infrastructure owners can do more to help the Emergency Services Sector and public by geospatially enabling their operational data.  Diligently working to find a balance between safeguarding data that could be misused, and increasing the granularity of information available during a disaster, on April 2, 2012, Oncor unveiled a new online outage map that provides an updated view of system status every 10 minutes.  On April 3, 2012, a series of tornadoes struck the Dallas-Forth Worth Region. Find below some representative views of the Oncor system captured during that event: 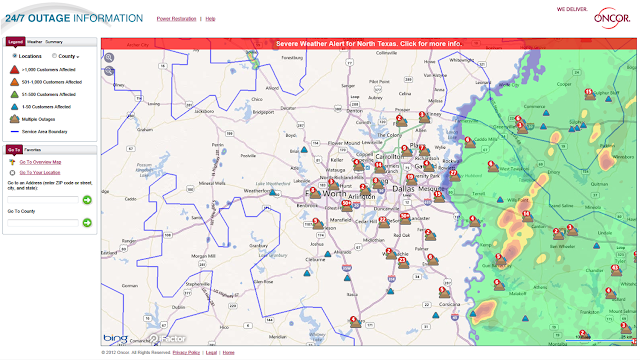 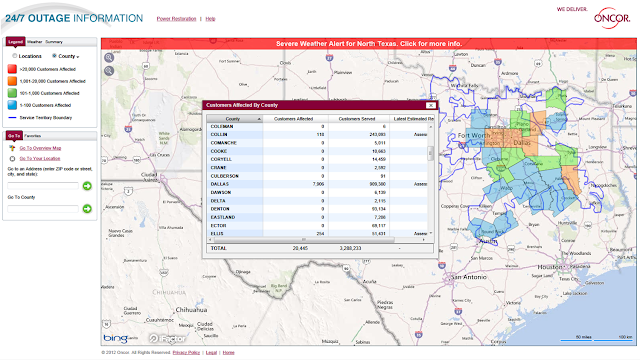 Outages can be shown by county or zip code, both textually and graphically 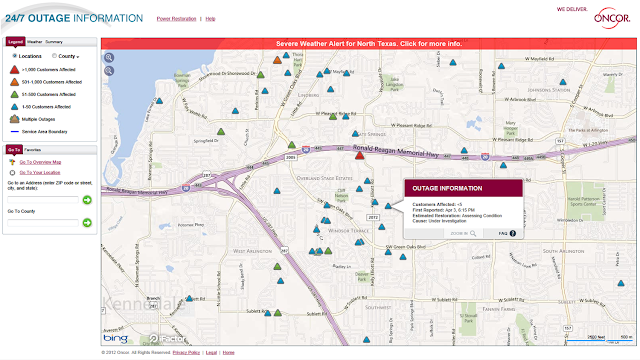 Information about time of report, estimated time of restoration, and number of customers impacted is available down to street level
To learn more, use the links below:
Comment: Sometimes truth is stranger than fiction. The day after the Oncor system went live, tornadoes hit.  The topic of the Dallas-Fort Worth GECCo: a tornado scenario that mirrors the April 3, 2012 outbreak to the point where it is spooky.  But beyond those ironies is the real message.  Through its efforts, Oncor has shown the rest of the utility industry that it is possible to share real-time data about its infrastructure in a way that is of real benefit to both the public and Emergency Services Sector - without compromising corporate or national security.  And for that, it's hard to say enough good things about Oncor and its staff.
Posted by Steve At 7:00 AM