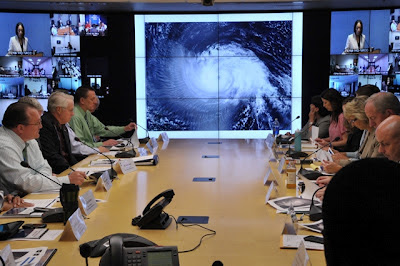 Since late February, Richard Spires, Chief Information Officer of the Department of Homeland Security (DHS), has been reporting that DHS is taking steps to integrate the information technologies of several different tenant organizations. Of specific note, in a Federal Computer Week article published last month, Mr. Spires offered that one of the more vexing problems currently being worked is DHS agencies own more than 20 different versions of "Common Operating Pictures".  He even went so far as to quip: "So much for being 'common'".

Attention being paid to DHS's geospatial information technology efforts comes as part of a much larger review of DHS's information technology infrastructure underway in the halls of Congress.  From a March 1, 2012, hearing by the House's Subcommittee on Oversight, Investigations, and Management, Committee of Homeland Security, comes the following:

After nearly a decade, DHS’s failure to integrate its management practices remains on the GAO’s High Risk list.

Stove-piped management information systems continue to plague DHS with mismanagement, redundancies and duplication, and inefficient use of resources that has increased costs within the Department and bungled the implementation of security operations.

To learn more on the above situation, use the following links:

Comment: I've said it for years, and now it looks like parts of the Washington brain trust finally agree: "What's the most common thing about Common Operating Pictures (COPs)?  They're not common!"  But COPs don't need to have identical technology for "stove-pipe" users to visualize circumstances the same way.  Instead of sharing a common platform of technology, users need to share a common platform of DATA!  So any effort that focuses on the technology end of the COP equation without solving the shared geospatial data issue....... is only kidding itself.  To that end, no one is going to solve the data issue without incorporating "locals" into their efforts.  So if DHS truly wants to solve the issue of having different COPs under its organizational umbrella...... all it needs to do is look for the big red symbol in the right side border to understand what needs to happen in every state in the Union.


Lead photo credit: FEMA
Posted by Steve At 7:00 AM