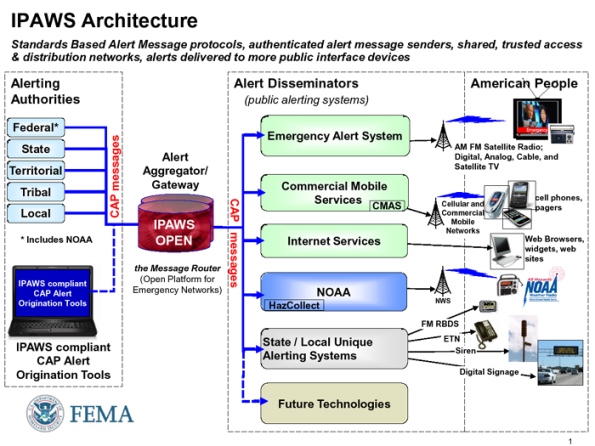 Although it has been many years in the making, the Integrated Public Alert and Warning System (IPAWS) recently began active roll out as the nation's warning system of the future. In concept, IPAWS will give national, state, regional, and local government entities with public safety responsibilities the ability to broadcast geographically targeted warnings and alerts using the full spectrum of modern communications and media systems. In addition to approaches we have known in the past like sirens, the Emergency Alert System (EAS), and NOAA Weather Radio, IPAWS will introduce new and integrated sub-systems designed for technologies that barely existed 20 years ago - like cell phones.  To help you understand the significant and far-reaching changes that will be taking place, the 5:00 video below may be helpful:


Additional resources for understanding the changes going forward include:


One of the IPAWS sub-systems that recently began introduction is the Commercial Mobile Alert System (CMAS), also known as Personal Localized Alerting Network (PLAN).  CMAS will be used to deliver Wireless Emergency Alerts (WEA) to cell phone customers without having to rely on normal text and communication channels. WEA's will be sent using uniquely structured 90 character text messages that will come in one of three different versions:

In order to receive a WEA message, a cell phone subscriber must own a WEA enabled phone, and the cell carrier must be a CMAS participant. Additional resources that may be helpful in understanding CMAS/WEA concepts include:


Comment: Lots to chew on in the above if you haven't heard about IPAWS or CMAS before. If that is the case, the Michael Gerber, NOAA/NWS presentation that runs from 2:40 - 31:40 at the link immediately above and is probably the best single reference - especially if you are interested in knowing how NOAA alerts can be be pulled into mapping applications.  Also worth noting: Minnesota's Homeland Security and Emergency Management Division has been sponsoring an IPAWS work group since the start of the year.  Go here to learn more.
Posted by Steve At 7:00 AM