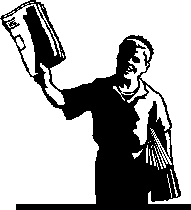 Hot off the press, here are updates on some stories we've been following:

Bird Flu: Late last week, the Dutch version of research on how to make Bird Flu into an airborne transmittable virus was published in Science. Turns out, release of the information was not the security threat most had feared. Developments leading up to the event did, however, go a long way toward establishing protocols for release of scientific research that could be used for terrorist purposes. To learn more, click the desired link below:

SEC Charges LightSquared Backer Falcone With Fraud: On Wednesday, the U.S. Securities and Exchange Commission (SEC) formerly charged Minnesota hockey phenom turned hedge fund manager, Phillip Falcone, with fraud. It's a sad fall from grace for the "man behind the curtain" of the LightSquared effort that would have disconnected functionality of GPS nationwide. Don't worry though, the Chisholm native has more than a few billion in his pocket to fight the charges. To learn more, click the desired link below:

Comment: Things are moving fast in a big way.  You'll need to stay tuned in if you don't want to get left behind by the revolution in geospatial and related technologies! Hope you have a great weekend!
Posted by Steve At 7:00 AM