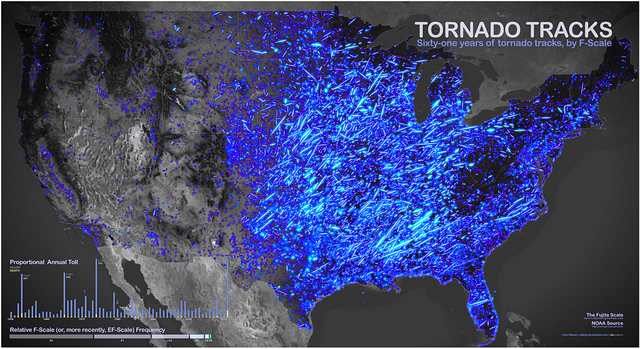 In no particular order - Four For Friday:

Tornado Tracks: As seen above, last month John Nelson at his IDVsolutions blog released a graphic and supporting materials which show the location, track and intensity of 61 years of tornadoes across the U.S.  That effort was recently joined by one showing the intensity and location of earthquakes around the world since 1898.  More on these efforts is available using the links below:


EPA Flyovers: Recently, the EPA started conducting regulation compliance inspections of Midwest farms from the air. Reminiscent of issues associated with a drone being used in the arrest of a North Dakota farmer last year (see: Drone Arrest - Legal or Not?), area ranchers, feed lot owners, farmers - and now local legislators - are not real happy about this development. Use the link below to learn more:


Waldo Canyon Fire Imagery: Sanborn has made available an aerial mosaic of the burn area for the Waldo Canyon Fire that occurred to the west of Colorado Springs. Hearts and prayers go out to those who lost their homes or more.  The links below will provide access to the viewer and background information (screen opens dead center over the edge of the burn area, works best in FireFox and Chrome):

EPC Meeting PowerPoint Videos: OK, so they are never going to win any Academy Awards.  Now that we're past that issue, for your extended viewing pleasure and education, find below links for the three educational presentations that were offered at the EPC's June 14, 2012 meeting (links to these presentations, as well as stand-alone, high quality slides, are also available in the right side bar):


Comment: Next week, come back ready to go swimming.  Until then, have a great weekend!
Posted by Steve At 7:00 AM