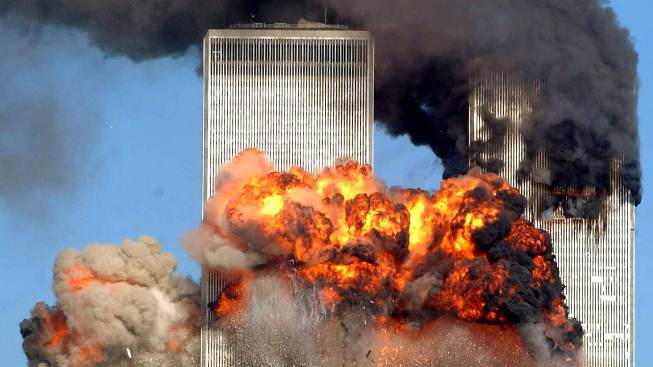 In remembrance of the 2,977 individuals who lost their lives as the result of the 9/11 terrorist attacks, on December 18, 2001, President Bush signed Public Law 107-89, thereafter designating September 11th as "Patriot Day" in the United States. This discretionary day of remembrance requests two things of all Americans:

Comment: A couple of thoughts about this day from a geospatial perspective:

First, in the days after the 10th anniversary of 9/11, this author reviewed the available map and imagery collections that had been mentioned in various remembrance publications. Two were thought worthwhile to pass along.  They were:

A review of options offered this year, adds a third to the list:

Second, when it comes to events that shape the scope and depth of a nation's geospatial intelligence efforts, nothing is more impactful than war.  However, with the War on Terror, there's a dramatic twist.  Unlike a traditional war, our nation's geospatial intelligence efforts have had to focus on our enemies' lands, and on our homeland as well.  That's because unlike any other time in American history, the potential for WMD scale terrorism that was demonstrated on 9/11 means we need to clearly understand the vulnerabilities of our nation's critical infrastructure.  And the best way to do that is - geographically.  Consequently, geospatial information efforts like the Homeland Infrastructure Foundation Level Data (HIFLD) Working Group have come into existence to deliver a basic static data capability that can be used for both man-made and natural disaster responses - while some items of geospatial data are now thought by some to be too dangerous to openly share (see: Blurred Satellite Images - Living in the Post 9/11 World).

Lead photo: National Geographic
Posted by Steve At 7:00 AM