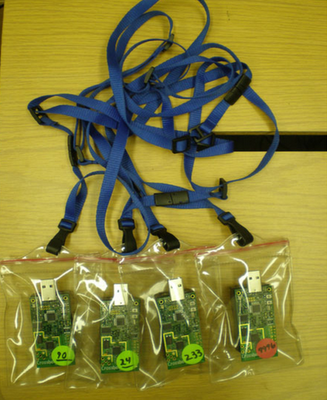 In early November, the University of Pittsburgh (UP) launched the second round of a study it calls "Social Mixing and Respiratory Transmission (SMART) in Schools". As stated on the program's website, the goal of the effort is to:


....use multiple methods to quantify the contacts that school children make that could potentially transmit influenza including survey, proximity detectors and GPS devices in order to evaluate each of these methods. We will also link measures of social contact to the risk of acquisition of influenza.

Approximately 450 children carried "motes" (picture of four mote units above) that allowed researchers to track student movements and interaction during the study. Below for more:

Comments: It appears the University of Pittsburgh really "gets it" when it comes to understanding location is a key factor impacting the transmission of deadly communicable diseases, as well as other public health crises. As noted earlier this year, the Center for Biosecurity at the University of Pittsburgh Medical Center (UPMC) has brought consideration of location into its ground breaking efforts to plan the medical response steps for a nuclear weapon detention in a U.S. metropolitan area (see: Nuke the Neighborhood - Part 1, Nuke the Neighborhood - Part 2). Kudos go out to researchers in both programs for their ability to think spatially!