Another Black-Eye for Apple Maps 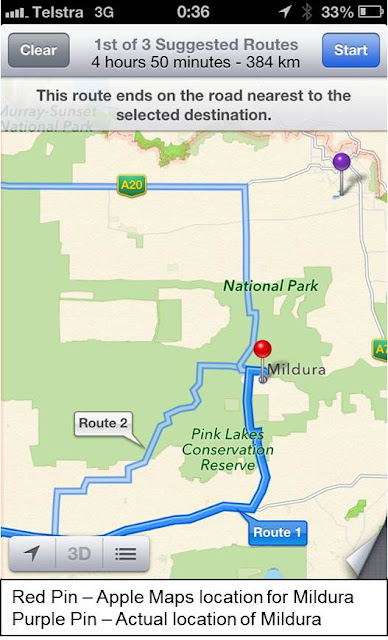 Yesterday, Apple Maps PR woes continued in a big way. In a news item that was widely reported in the popular press, police in Mildura, Australia are warning motorists they should not use Apple's iO6 Maps app to find their town. The crux of the matter is Apple's mapping feature is showing the town of 30,000, some 40 miles southwest of its real location. As a result, motorists have been wandering into the desolate Murray-Sunset National Park instead of arriving at their intended destination. Given the park is located in the Australian Outback where temperatures can reach 46 degrees Celsius (114 degrees F), Mildura Police are concerned motorists could become stranded and die of exposure. More below:

1. ) I don't own an Apple anything, but I refuse to pile on. Anyone who thinks that other mobile mapping apps, including GPS, hit the street in flawless form - or stay that way - is just kidding themselves. Google and others were far enough ahead on initial release that the mere capability was breathtaking. Indeed, in the early days of GPS/Maps, data providers got away with release mistakes that are now unacceptable because of evolved expectations. I believe a review of the clip below reinforces that point.


2.) Earlier this year, I offered review of the Apple Maps situation and underlying meaning for the Emergency Services Sector. This latest development only reinforces the point of that post. Go here: