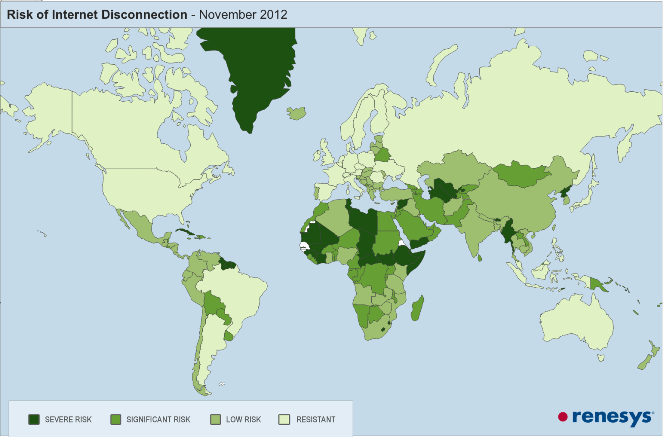 The full range of what's out there in this big old world is truly amazing. From the cut-and-dried, hard-edged reality, to the mushy, fuzzy, jaw-dropping absurd.  Indeed, it's just like you will find here every Friday on EPC Updates....

Turn Off the Internet?  Yup, its possible. In fact, in a few countries around the world, it amounts to nothing more than flipping a switch. Map above and link below tell the story.


Red Light Cash Cow Gets Sued. There you are minding your own business trying to make it through a yellow light before it turns red and - dang - you could have made it through if you just had another .5 of a second. And sure enough, the enforcement camera at the intersection has taken a picture of your car's license plate and now you are out at least $50.00. Turns out motorists in New York City think they got cheated out of that .5 second in many places where cameras and lights are mated, so they are suing the city's $45+ million/year cash cow.  More below:


In RFID We Trust. When you can't trust a man of the cloth, who can you trust? Apparently, the Vatican believes it's location tracking RFID chips as it moves to tighten down things after a recent scandal. Details in the story below:


McAfee Location. For weeks he eluded an international manhunt because no one knew for sure where to start looking. Then, in the time it took a couple of journalists to snap a pic, and post it online with a self-promoting title like, "We Are With John McAfee Right Now, Suckers", a record of John McAfee's location was made available for one of the "suckers" to decode the geolocation data and then tell the world.  Altogether proving that you should never let yourself become so impressed with yourself that you start believing your own hype. Suckers who weren't privy to the fun the first time around can learn more below:


Stupid Criminal Suspect Trick Number 5.12 Billion. OK, so maybe that's an exaggeration - but not by much. Just when you think the highly adept, social media maniac generation that is coming into its prime right now has full command of all the technical wizardry that is out there, one of them prominently offers up it ain't so - usually, it has something to do with crime. I didn't think you could top Tweeting about post Sandy Hurricane looting, but I was wrong. Numbskull  making Police work easy, in action below.


Truly hope you have an absolutely brilliant weekend!
Posted by Steve At 7:00 AM