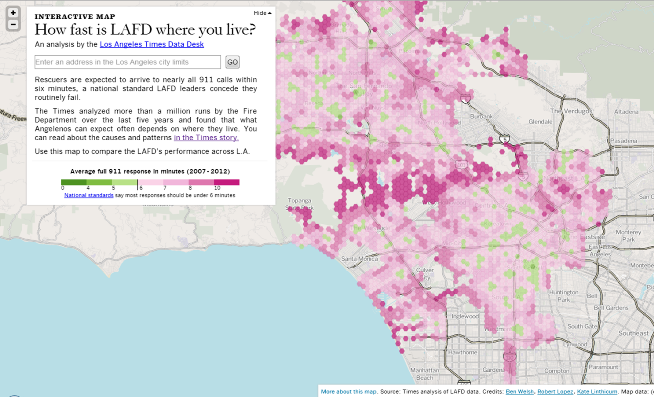 In March of 2012, a Los Angeles Times investigative report found that medical emergency response times in LA were slower than what the LA Fire Department (LAFD) had been reporting. Since that initial report, the newspaper has published a series of articles discussing specific issues contributing to these slower than reported response times. In the middle of last month, the paper ran its most ambitious article to date, one which examines the interplay of where response assets are based, and the length of time it takes for help to arrive. In many cases, the results were counter-intuitive. Some of the more affluent parts of the LA basin had the worst response times. To prove that point graphically, the LA Times published an interactive map that allows users to look at response data on a detailed level.  Below for more:

How Fast is LAFD Where You Live?
(LA Times Interactive Map)


Comment: The LA Times work on this one is exceptional on at least three levels. First, they used a GIS to prove a point critical to this story; second, the quality of what they produced is truly noteworthy; and third, the staff working on this effort released part of the project as an open-source base map (Quiet LA) that others can use. Nice work, LA Times!