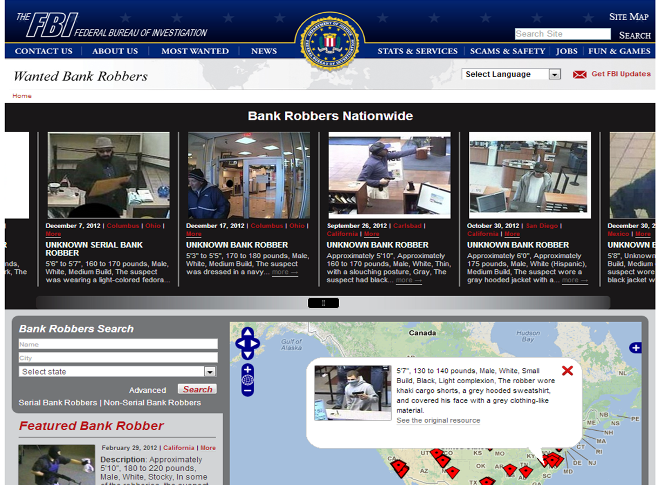 The Federal Bureau of Investigation (FBI) started 2012 by trying to increase their use of social media and open source data mining. For 2013, they started the year by unveiling their first public web site that uses geospatial technology. Released as part of a FBI web site that requests help from the public, a Google map shows the locations of recent bank robberies. Robbery location markers can be expanded to show a picture of a robbery suspect as taken by the respective bank's surveillance camera.  Data associated with the map can be searched down to details like type of weapon used in the robbery. Use the links below to learn more:

Comment: It's pretty interesting that a Federal agency known for its cutting edge use of technology finds itself catching up with what has been a standard feature on many local law enforcement web sites for the past couple of years (i.e. Eagan, MN Police Incident Mapping Application). But, better late, than never; and the FBI's approach offers some significant improvements.  Keep'm coming!