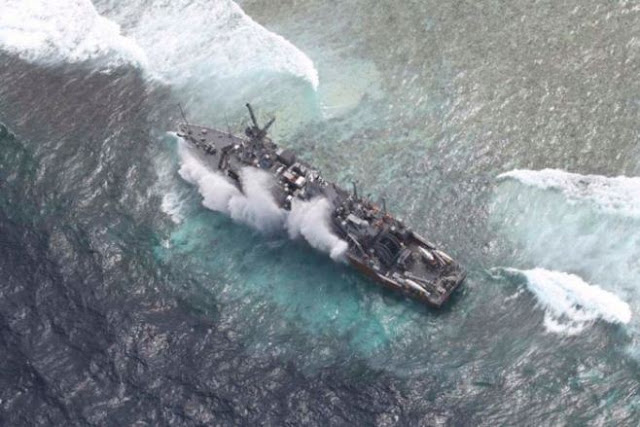 I never run out of stuff for Friday because the absurd is always right behind the next step into the future. And, you can't stop the clock. So, strap in for an irreverent trip through some very far away stories.

Destination One - Republic of the Philippines: What ya say we start out where we left off last week?  You know, the U.S. Navy minesweeper that ran aground in the Philippines because a navigation chart mis-plotted a reef by eight or nine miles. After a week of big-wig pondering, the decision came down - cut up the ship. $61 million down the drain for the ship, plus undoubtedly millions more in fines.  That would have bought a LOT of GIS. Point that one out next time some budget ax wielding admin wonk tries to tell you maps aren't THAT IMPORTANT.....  More below (the waterline):

Destination Two - Planet Georgia: When it comes to a whacked out story title to go with a whacked out and truly unfortunate story, this one is right up there. Is the editor trying to create a "brewing controversy" which results in GPS control laws - only trained geospatial professionals can be trusted with them?  Your call on that point - below for details:

Destination Three - Blow Hard Central (aka "The Windy City"): Speaking of controlling something, what do you say we check in on the non-stop national debate - guns. Apparently, a Chicago City Councilman has the answer - GPS.  Hey, wasn't that the exact mix in the story above?  But wait, there's a twist, as there always is.  The plan would be to install a tracking chip on every gun in the City so a weapon could be tracked if stolen.  What, exactly, would keep criminals from removing those chips, wasn't addressed in the story. It's a GREAT day for wind surfing! Yee....Ha. More below:

Destination Four - BRAZIL!!!!!: I am not exactly sure what type of tourist is out cruising around admiring the Brazilian sidewalks when they could be at the beach admiring a very different scenery. But, that issue to the side, you have to give the innovators to the South big credit for thinking outside of the box on this one.  Look down for more:

Destination Five - North "Let them eat bark while we build WMD" Korea: Talk about one extreme to the other.  One minute you are in lush, bright, warm, booming, free-spirited Brazil, and the next you are in stark, drab, cold, stagnant, rigid North Korea.  Up until recently, only one of the two was worthy of being on Google Maps - I'll let you guess which one. That changed after Google Chairman Eric Schmidt recently returned from a trip to North Korea.  Circumstances which give me concern he might have been slipped a dose of mind controlling kimchi. You know, the programmed double agent thing - the double agent does something that clearly demonstrates his/her allegiances like publishing the first detailed public map of North Korea, while the whole time actually plotting takeover of the world at behest of the insanity north of the DMZ.  More below, if you dare:

Colouring in North Korea: Map of the Secretive State is No Longer a White Expanse as Google Pencils in Train Lines, Labour Camps and Hospitals
(MailOnline, January 29, 2013)

And with that, hope you find your way to a "Super" Weekend

Lead photo: www.abovetopsecret.com
Posted by Steve At 7:00 AM