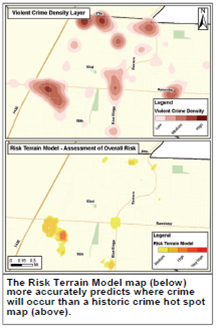 Well known for their development of real-time geospatial modeling that supports at-sea Search and Rescue (SAR) efforts, Rutgers University has recently become involved in similar efforts on-shore in support of the law enforcement community. Under a grant provided by the National Institute of Justice (NIJ), researchers at the university are collaborating with six municipal law enforcement agencies to expand use of their risk terrain modeling approach for crime prevention.  As envisioned, the two part effort will first work with partner police forces to refine data collection and analytic approaches previously developed by Rutgers, while a second phase will examine model effectiveness when cities act on information coming out of the process. In support of the effort, a web site has been set up to provide project information to other law enforcement agencies and the general public.  More below:

Comment: Although other efforts along these lines have been previously attempted, as far as this writer knows there has never been another project with this type of scope. Good luck Rutgers!