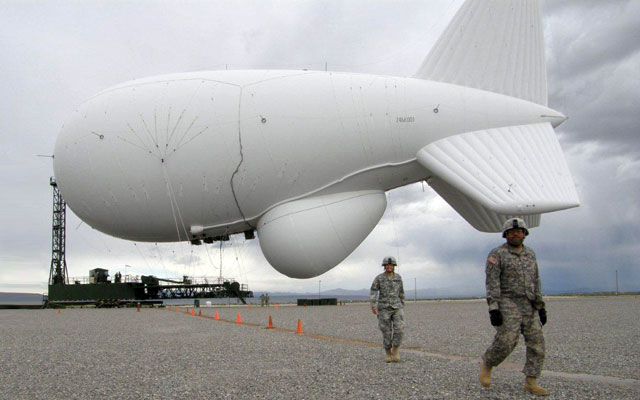 In May of last year, this blog reported on tethered blimps known as "aerostats" that were being used for area surveillance in Afghanistan and Iraq. As part of that discussion, consideration was given to some point in the future when aerostats might be similarly deployed domestically to thwart made-made disasters, or to enhance situational awareness when responding to natural disasters (See: Is There a Surveillance Aerostat in Your Future?). Last week it was announced that future will be here sometime next year when two such ligther-than-air surviellance systems called JLENS (Joint Land Attack Cruise Missile Defense Elevated Netted Sensor System) will go airborne over Washington, DC. Use? Defense against cruise missile attacks.

Comment: Whenever the JLENS goes airborne, watch for howling about invasion of privacy. As most readers of this site know, that is normally a camp where you will find me. However, on this issue, my thinking aligns with this effort. After 9/11, the U.S. government was lambasted for its "lack of imagination" when it came to stopping the events of that day. Here, someone is thinking outside the box and sees the potential for folks who mean to do us harm using a combination of now readily available technologies in a way that could mimic the attacks of 9/11 - except there would be no need to have manned air-frames.

Picture credit: Popular Mechanics
Posted by Steve At 7:00 AM