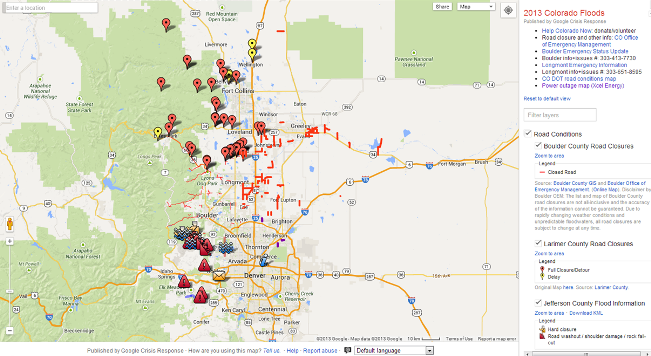 Back in 2005, Google made headlines when it rolled out its Google Maps product. It was a development which caused more than a few to ask - "Why didn't I think of that?" But no matter how novel the concept, it still took a few years before Google's unique approach to delivering geospatial information became an expected standard with the American public. Now, according to several recent reports in the popular press, that same series of events may be playing itself out with another Google mapping effort. Only this time the product is focused on the world of emergency preparedness and response. Links to an example article and Google Crisis Map for Colorado can be found below:

Comment: As noted in the article: “A lot of problems during disasters are typically information problems," says Nigel Snoad, product manager at Google Crisis Response. "People are increasingly turning to the Internet during this time.” Yup - and oddly, the vast majority of data in a Google Crisis Map which satisfies those information needs is government produced data. So, I think it fair to ask, why then is Google doing government's job?
Posted by Steve At 7:10 AM