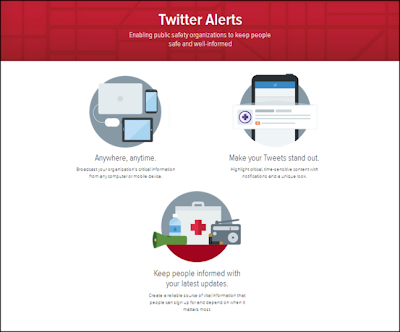 A handful of days after Twitter announced launch of its alert system that allows vetted organizations to "push" information to subscribers during emergencies and disasters, the system got its first major test in the nation's capital. As Washington, DC police gave chase to a woman who had attempted to enter the White House grounds on October 3rd, the Senate's Sergeant at Arms used Twitter Alerts to warn politicians and staffers about developments. Links below for more:

Comment: Very cool effort by Twitter which will allow targeted distribution of information during disasters and emergencies. Unfortunately, so far only a limited number of organizations in 17 states and territories have committed to using Twitter Alerts. And, an important related issue will always be getting Emergency Services Sector (ESS) organizations to understand effective use of Twitter includes being able to use tweets from the "crowd" to help develop situational awareness. See: Trending: Social Media Use During Disasters, for more on this issue.
Posted by Steve At 7:00 AM