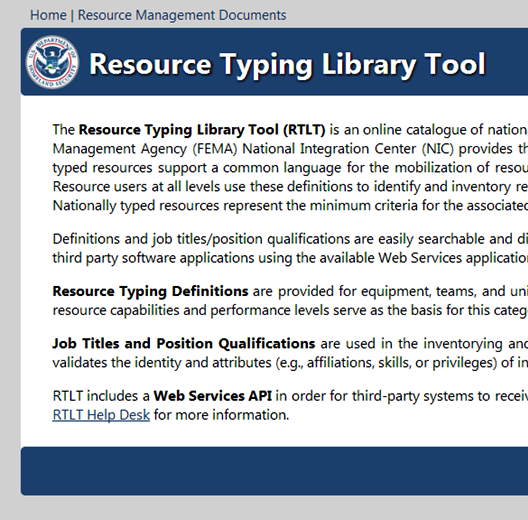 Well, I've been sitting around waiting for someone to correct an oversight.  But since that hasn't happened, I'm once again going to have to be a fanatic about the use of GIS (or lack thereof) in the Emergency Services Sector. Point of concern for today - FEMA's recently released Resource Typing Library Tool (RTLT).  From one of FEMA's promotional items about the RTLT, here are a couple of the descriptive highlights:

The RTLT is an online catalog of national resource typing definitions and job titles/position qualifications. Definitions and job titles/position qualifications are easily searchable & discoverable through the RTLT. They can be viewed directly on the web page, downloaded in PDF format or directly used by third party software applications using the available Web Services application programming interface (API)

Nationally typed resources support a common language for the mobilization of resources prior to, during, and after major incidents. Resource users at all levels use these definitions to identify and inventory resources for capability estimation, planning, and for mobilization during mutual aid efforts.

Now if you would like to dig around in the RTLT and learn more, here are some links to get you started:


Like I said in the beginning, I've been waiting for someone to correct an oversight. In this case it would be the RTLT hit the street as a product that completely ignores the reality of FEMA's own doctrine. NIMS and the NRF tell us how important "Situational Awareness" and "Common Operating Pictures" are, and yet the RTLT completely avoids any mention of the personnel who have the technical skills and training to create the products that make those concepts possible. A search of the RTLT using terms "mapping", "GIS", "remote sensing", and "imagery" returns zero responses. Seriously FEMA?!? One minute I see something that makes me think you guys are finally getting it, like when proposed standards for GIS personnel that were released last summer, and the next, something like this happens.

As I write, the search for MH 370 is ongoing. At the core of that operation are GIS personnel who are developing everything from imagery leads to search patterns. But according to the RTLT, individuals like this aren't needed. A point of reflection, worthy of a weekend.