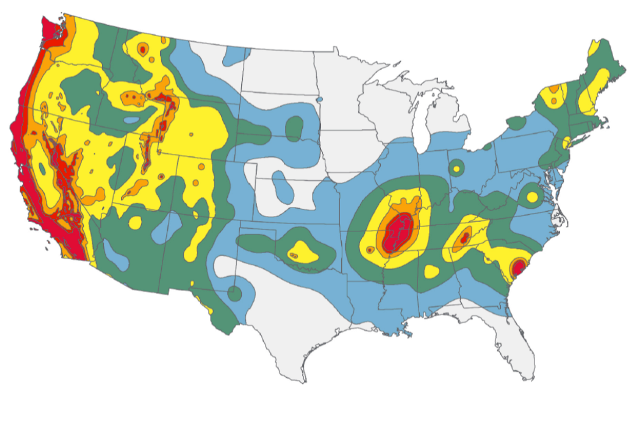 The U.S. Geological Survey (USGS) recently updated its National Seismic Hazard Maps for the lower 48. Last published in 2008, the 2014 maps were developed using new ground motion models and show 42 out of 48 states at risk for damage from ground shaking in the next 50 years. Areas at risk for significant damage remain primarily the West Coast and New Madrid Seismic Zone. However, when the new models and recent activity in those two areas were considered together, there is potential for greater damage than previously anticipated.  More below:


Comment: I knew there was a reason I'm living in Minnesota besides the great winters...no appreciable chance of an earthquake! All kidding aside, even those states without significant direct threat from an earthquake should be planning for one. That's because in this day and age of interconnected infrastructure a significant event in one part of the country is going to have serious indirect impact on other parts. And, there will be a need for significant response and recovery assets from outside the quake zone. Of great concern in that regard is the New Madrid Seismic Zone through which a substantial amount of the nation's liquid energy (in pipelines) and a majority of nation's inland waterway commerce passes. Unfortunately, to date, much of the response planning for that area has only involved states which would be directly impacted.
Posted by Steve At 8:00 AM